Eco-Cities: Where in the UK Can Be Crowned the Most Eco-Friendly City?

Home | Your Health | Eco-Cities: Where in the UK Can Be Crowned the Most Eco-Friendly City?

Writer and expert / Posted on

As cities get bigger and the UK’s landscape becomes more and more urban, increasing numbers of people are being far more conscious of their impact on the environment and what they can do to lessen it.

Whether it’s recycling, shopping local, growing your own produce, or reducing the amount of meat in your diet, there are lots of ways to lower your footprint, but where in the UK is it easiest to go green?

We’ve ranked some of the country’s biggest towns and cities on a variety of green factors to determine which are the UK’s best Eco-Cities. 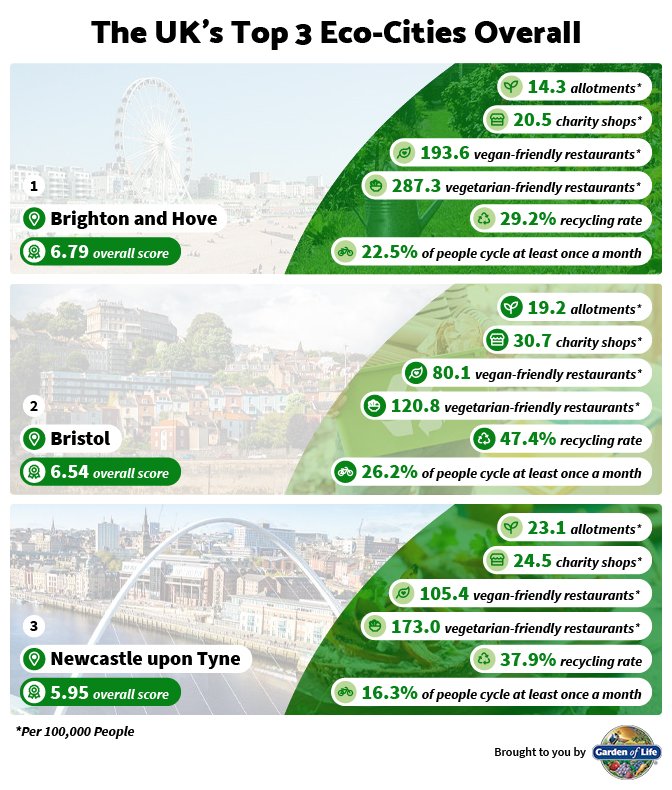 Taking the top spot for the country’s most eco-friendly city, with an overall score of 6.79 out of 10 was Brighton & Hove, on the South Coast.

Brighton was the top-ranking city for both vegetarian and vegan-friendly restaurants per person and also had the second-highest rate of people choosing to cycle at least once a month (22.5%).

Another city with great green credentials is Bristol, which was actually named ‘European Green Capital’ back in 2015 and takes second place in our ranking, with a score of 6.54 out of 10. Bristol had the highest number of cyclists of all the cities that we looked at (26.2%) and is also home to 111 allotment sites across the city, which works out as 19.2 per 100,000 people!

The highest scoring Northern city on our list was Newcastle upon Tyne, with a score of 5.95 out of 10.

‘The Toon’ had the highest rate of allotments per person, with 23.1 for every 100,000 people, and scored highly across the board. 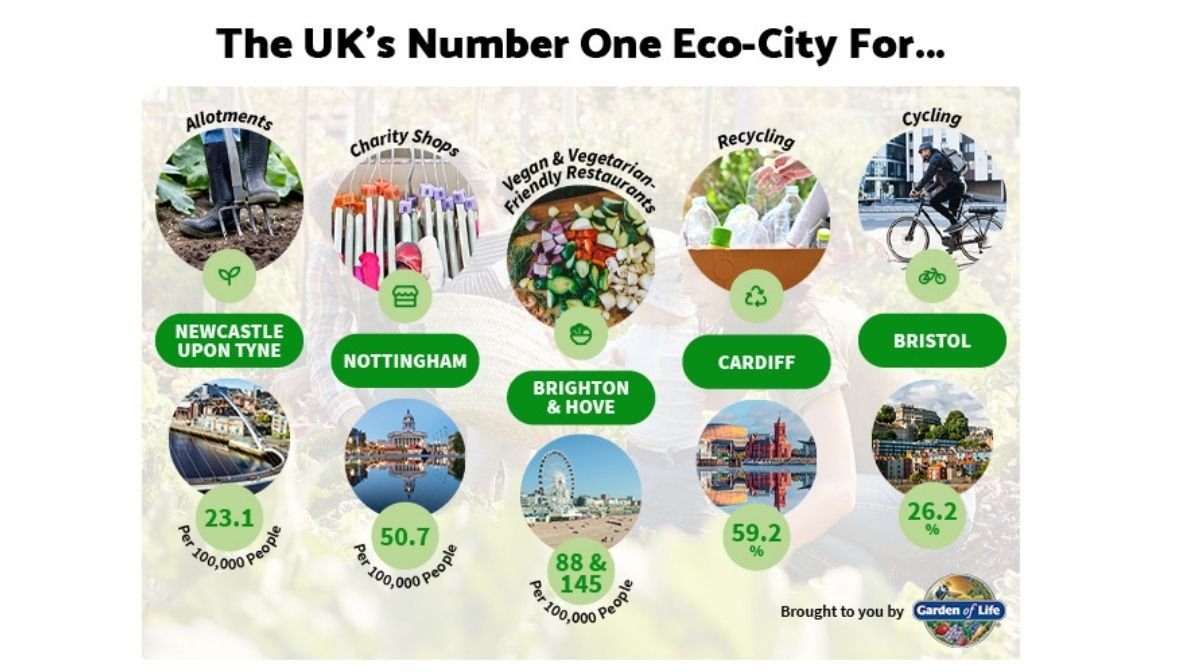 Number One for: Allotments – Newcastle upon Tyne

Growing your own food is a great way to reduce your personal carbon footprint and it appears that Geordies must be a green-fingered bunch, with Newcastle boasting 66 allotments, which, per person, is more than any of the 30 towns and cities that we analysed.

Number One for: Charity Shops – Nottingham

More charity shops mean more opportunities for things to get reused and recycled, rather than just ending up in landfill somewhere. Out of our 30 cities, it was Nottingham, in the East Midlands, which had the most charity shops with 50.7 for every 100,000 people in the city.

Brighton ranked in first place for not only the number of vegan-friendly restaurants, but vegetarian too, with a thriving plant-based community. Even if you’re not vegan or veggie yourself, cutting down on your meat intake can be a good way to reduce your own personal impact on the environment.

Number One for: Recycling – Cardiff

Cardiff (and indeed Wales as a whole) has one of the highest rates of recycling in the UK, with 59.2% of all waste either being recycled, reused, or composted. In fact, it’s one of only two cities on our list which met the UK’s nationwide target of achieving a 50% recycling rate by 2020.

Number One for: Cycling – Bristol

Finally, the city which had the highest number of people who cycled at least once a month was Bristol. The city has a great cycling infrastructure, with cycle routes on almost all of its major roads, and was named the UK’s first ‘Cycling City’. 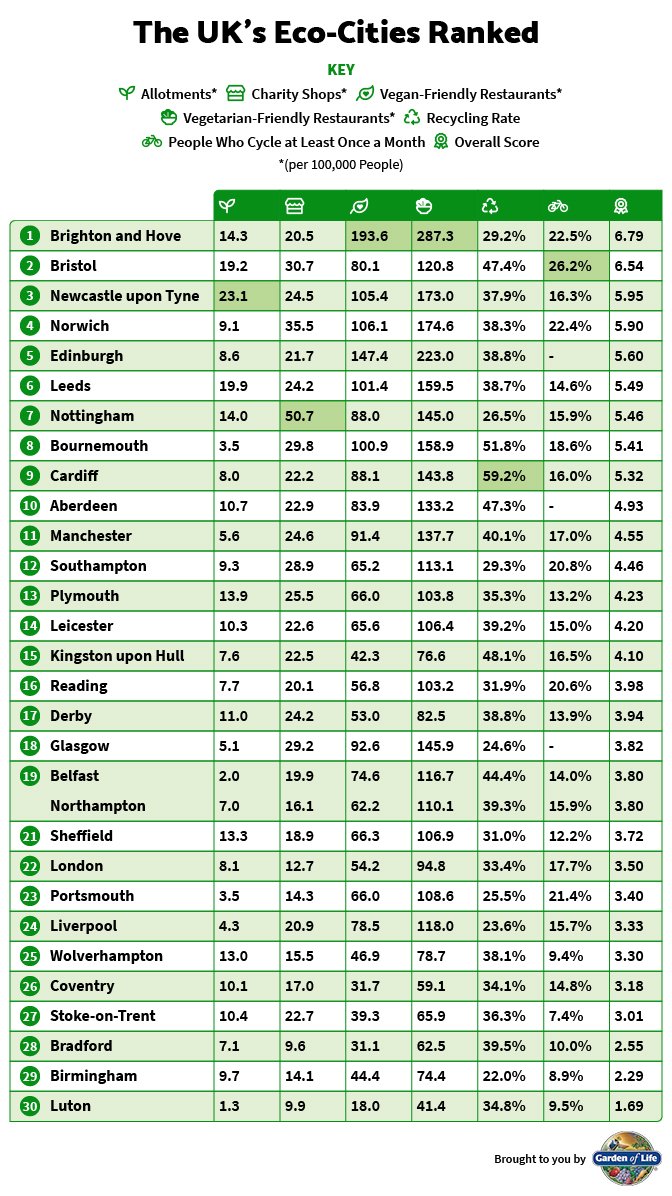 We ranked the UK’s 30 most populated towns and cities on the following factors, giving each place a normalised score out of 10 for each factor, before taking an average score across all six factors.

Unfortunately, comparable cycling data was unavailable for Scotland, so for Scottish cities, an average was taken across the remaining five factors.

The number of council-owned allotments per 100,000 people according individual council website. Full sources can be viewed here.

The number of charity shops according to Yell.

The number of vegetarian and vegan-friendly restaurants according to Tripadvisor.

People Who Cycle at Least Once a Month

The proportion of people who reported taking part in cycling of any type, at least once per week, according to:

The percentage of household waste which is either recycled, reused, or composted according to:

What Does Organic Mean?

Good Bacteria vs Bad Bacteria: How to Benefit from Yours

What Are Antioxidants and What Can They Do For You?

How to Detox Your Body: The Garden of Life Guide